Breakfast, eggs & toast
Kid did the usual, dh is out of town, salad & chicken (from freezer) for me
Mini pizzas using bobolli mini crust (mine used up the leftover tomatoes with balsimic vinegar from dinner on Sunday) 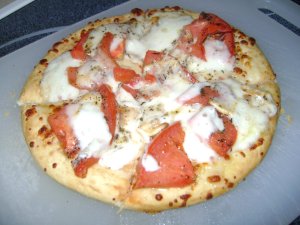 I bailed out on boxing today. Well, not really bailed out. Had some stuff at the office to do that would have put me in there late. So decided to skip it and get my work done instead. Still didn’t get home til almost 7 anyways. Had the crust and pans on counter with cheese, pepperoni & sauce in fridge so everything was ready for the kids to prepare & bake on their own without waiting for me. Anything to ease the dinner time crunch I’ve been experiencing lately.

DH called (he’s in Indy for 2 days) to tell me how he ‘scored a showercap’ for me. It’s funny! I’m always telling him to get some showercaps from the room as they make GREAT food covers for the large platters and such. For awhile there, he was getting them everywhere. And then suddenly, they must have been on the downsize list because no one had them in the rooms anymore. Of course, I kept trying to get him to ‘ask’ for one, but he refused. Guess he doesn’t come across as that kind of guy .