That the day is going to be a rough one.

For instance, a quick run to Walgreens at 6am to get these

See, Hubby left the house at 5am to catch a flight. I laid there, twitching, as I was still tired and not quite ready to get up for the day yet … I’ve enjoyed sleeping in til 6am during the week.

But I kept hearing something. REMEMBER: I’m hard of hearing, so for me to HEAR something while dozing is unusual.

Finally, after 20 minutes or so, I call for Kitty, thinking he’s out in the living room playing with his toys or whatnot (hey, he does these typical cat things occasionally).

No responding meow or a hop up on bed. So I keep listening and finally get up. I peek around the door from the bedroom into the living room, flip on the track lightning … because you just never know what you might see in the morning …

And there, I see Kitty’s toys … he’s got 3 favorite little mice that he tries very hard to keep from getting lost under the furniture, and they were all gathered up in the middle of the floor.

But wait. What’s that bigger one in the MIDDLE of the 3? That doesn’t look right … it has a tail and none of the other’s have tails, cuz that’s the first thing to get ripped off by Kitty.

At that point, I yell “KITTY!!!” because I’m going to beat me some furry butt real soon … and the little larger than the normal rat toy goes skittering across the floor underneath the big recliner.

Now, mind you, normally, I’d be saying “Honey! Mark! Get up! I need your help with something” because who in the heck wants to deal with a rat mouse at 5:30am by themselves?? Unfortunately, this is NOT my first time playing catcher to a runaway ‘toy’. But it’s just ME to deal with it now.

Kitty is NOT in the house. Why should he be? His new toy will be safe and secure in OUR house, you know? So as I’m getting dressed to go out and find the OLD mouse traps, in he walks, meow meow meowing all the way. He took one look at me and just threw himself down on the floor … then stared at the chair … how he could possibly know it was there I have no idea. All I know, in the 5 minutes it took me to brush my teeth and put on shoes, he chased it down the hall into the laundry room where I could hear him batting something around. Great. I KNOW there was a pile of clothes on the floor, and ummm, I am NOT picking them up now!

Can’t find the mouse traps in the garage. Text Hubby. He insist they are out there somewhere. Forget about it and drive to Walgreens. $4.29, 4 mousetraps and a newspaper (to lay under traps so I don’t have to get too close IF and WHEN I catch something) and I’m back home.

Because I’m still half asleep, I can’t read the directions nor figure out how to set the trap so thankfully, Google came to the rescue.

A little peanut butter on one. A little smooshed sharp cheddar on the other and then two with a combo of each.

One under the dishwasher (last trap was set within 5 minutes last time), one behind the chair, one in the linen closet (hallway) and one in the laundry room. 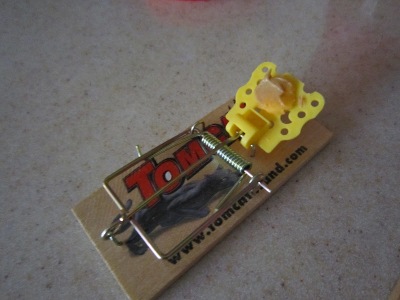 Keep checking, nothing. Hmmm. Ok, maybe he’s ‘injured’ as Kitty does like to show his toy who the boss is … Gosh, I’m hoping not too badly as I don’t want the thing to crawl and die somewhere IN THE HOUSE!

Go to work, leaving notes for the mini adults. Kids go off (to check out The Fresh Market) and come back. They are tossing bags and such in the kitchen garbage can and think they hear something crunching and then a thud. Call me and say “Hey, we think the mouse is caught!” … well Dummies, go look and see!!!

Right then, Princess looks at the garbage can, and what do you think she sees?? Yup, the mouse is in the garbage, eating the CAT FOOD that I had swept up that morning. Oh my … you would have thought it was MIGHTY MOUSE based on the commotion the kids were making.

Long story a little shorter: Princess is demanding that Sonny Boy get the mouse … umm, more like shrieking. Sonny Boy closed the lid of garbage can, put a heavy seashell on top of the lid (just in case it IS mighty mouse, you know?), scooted the garbage can out the sliding glass door, pulled it over to the fence, and knocked it over, and spent 30 minutes coaxing the thing out and under the fence to go next door.  And I’m told that it was a nice chubby, cute little mouse. Ummm, I’m thinking more like a PREGNANT RAT mouse

I’m not so sure if I’m proud of Sonny Boy for being compassionate (all living things, blah blah blah) or mad that he didn’t make it GO AWAY completely! Honestly, he’s like a living Dr. Doolittle. Geesh.

I still have the traps set. Hubby and I both sort of, kind of, wonder if this thing could have really gone the distances he did without Kitty catching him and then just hanging out eating cat food in the garbage can … just a little ‘odd’ don’t you think?

I’m done trapping this wildlife that Kitty brings in.

2 thoughts on “Sometimes You Just Know …”