Hubby is doing an excellent job of clearing out the pantry and freezers … I mean, geesh, look at the garage freezer!  I can actually see what we have in here! *the 2 red bags are gone now too!*

The main kitchen and guest kitchen freezers are showing some improvement as well, but not as much as the garage!


So … in sticking with the Pantry / Freezer Challenge (due to our recent decrease in income and hopeful potential upcoming move!) we decided to make the two smaller london broils that were in the freezer …


Now, keep in mind, Hubby does NOT like rare, medium rare, or even medium cooked beef. He likes his stuff WELL DONE and no pink inside. Obviously, these hunks of beef had to be cooked low and slow then as they would be tough as hell if we were to cook them on the grill to his liking.  Oh, and not to mention, while a lot of you have ice and blizzard like conditions, we have a simple wind advisory with current gust hitting 31 to 34 fairly consistently, so no grillin happening around here! As we couldn’t decide what we wanted to do, I went to Pinterest and typed in “London Broil Crock Pot” and one of the FIRST recipes that came up was this one …


S O L D as I had everything in stock, except the potatoes. We opted to use the premade mashed taters I had in the guest kitchen refrigerator instead!


Toss the london broil in large crockpot and turn to low.  Mine were frozen so they overlapped and one stuck up a little 😉


Add the rest of the ingredients to the crockpot and put a lid on it.  Go about your business and take care of them chores … for us, it was watching This Old House (!?) and Fast and Loud … 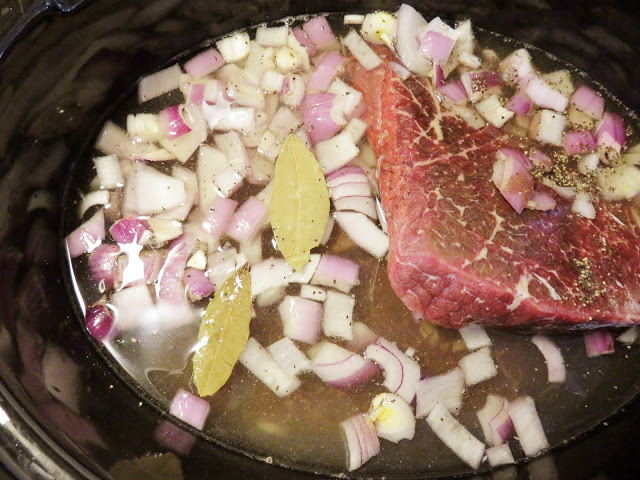 After a couple hours went by, I felt the need to break the cardinal rule and remove the lid to try and submerge both hunks of beef below the water … it worked, but not 100%


After 6 hours, I wanted to really reach in and remove the beef as I didn’t want it falling apart totally, I wanted to be able to slice it up. Again, Hubby fought me on this and won. We really don’t play well in the kitchen … the only reason he won is because I had to go pick up my dad from the hospital I can’t believe they release a patient at 6pm on a Saturday! Really???


We took the beef out at 8pm, 8 hours after it started. Grab your measuring cup and take 2 cups of the juice and dump in a saucepan. Measure 1/2 cup of water and 2 tbs of arrowroot powder (I didn’t have cornstarch) and whisk that together. Bring the juice to a boil and whisk in the arrowroot mixture and allow to thicken. Mine didn’t thicken to a gravy-gravy consistency (come to find out, Hubby added beef stock to the pan when I wasn’t looking so I didn’t have enough thickener) but it made a nice thicker juice to drizzle over the beef.  And, because I have a happy plant outside, I grabbed some parsley, chopped up a handful, and sprinkled over the meat … I always forget how great fresh herbs are when added to meat after cooking!


Had it not been so late, I would have taken pics but instead, I took pics of Hubby’s breakfast leftovers that I prepared for him! And then, of course, my lunch: 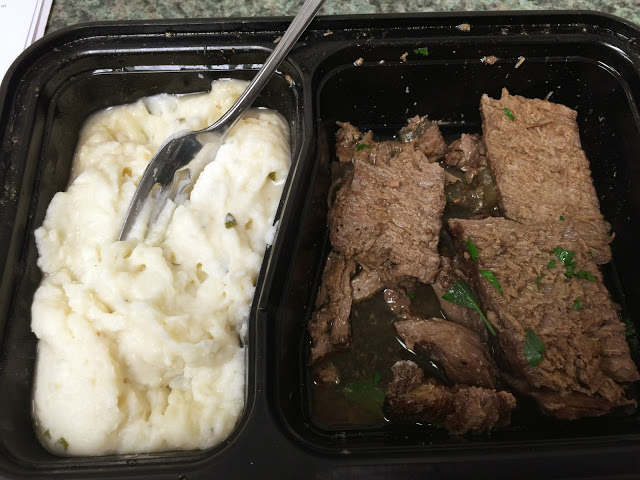 The beef was really good. A slight peppery taste but the flavors were spot on. This is definitely a keeper in our house!  Our next recipe we are trying from Dad With a Pan is his Chicken and Asparagus dish … pretty excited to give that a try as we have everything, yet again!

Looking
forward to sharing with some of these GREAT Parties … go check them out!