*I’m joining in on the #SeptemberWhole30 Challenge which officially started on Monday, September 5th (thankfully AFTER the holiday weekend was almost over!!*

Did you see my excitement a few weeks ago when I finally found the bags of riced cauliflower at Trader Joe’s? I made a bag of that stuff that very night without any thought … that’s how excited I really was 😉

It was really easy too since the cauliflower was already riced … all I had to do was zest a lime, chop some cilantro, juice the lime and cook the “rice”.

I have turned so many people on to this stuff in the past few weeks
that I may never find it again at the Trader Joe’s by my house!

*Type 1 Diabetics should be stockpiling this stuff with only 3 grams of carbs per serving!

This isn’t really a recipe, so to speak, but more of a process. And I’m looking forward to making it again! 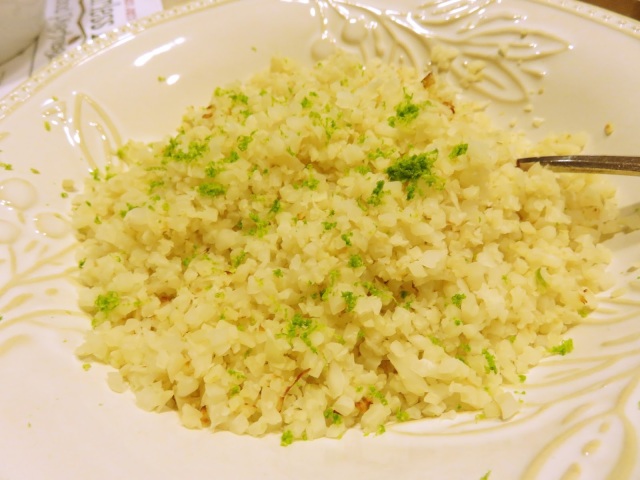 Here’s what you need:

1 12 oz bag of riced cauliflower (or you can certainly rice your own, it’s just messy)
handful of cilantro
1 lime

Toss your cauliflower rice into a non-stick skillet over medium heat and allow to heat through without messing with it much. I used my Green Pan and didn’t use oil or anything else and it was cooked in 15 minutes.

Add the cooked cauliflower to a bowl and toss the cilantro in. Zest your lime, cut the lime in half and squeeze both halves over the rice/cilantro mix.

Give a quick fluff/stir and serve up 😉

I had made this for Taco Tuesday (which really was a Taco Wednesday) and had a taco bowl – shredded lettuce, “rice” and meat … can I just tell you how dang happy my tummy was?? It was pretty tasty and I can honestly say that the day of Taco Salads are gone … I will forever be having taco bowls (ohhh….a knock of Chipotle bowl is in the future!!)

Looking forward to sharing with some of these GREAT Parties … go check them out!!